Africa: The Lion in the Sub-Sahara 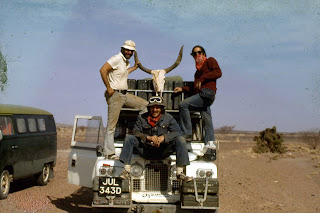 As a veterinarian, working with animals has been my life’s work. Most of what I do is based on education, another aspect is the intuition gained through experience.. What follows is the story about 5 animals who elected not to take my life and a human despot who would have. Not exactly “Pets and People”, however, threads of both weave their way through the experiences I will share with you.

This chapter began while I was serving in the US Air Force in Europe as a Base Veterinarian and Military Public Health Officer. During this time I had the opportunity

to drive throughout Europe and fly to the Middle and Far East. It created in me a certain lust for travel, and after managing a small animal practice in New York City for several years, I decided to seek meaningful experiences and put my career temporarily on hold as a matter of choice.

After putting all my material possessions in storage and acquiring a suitable vehicle for transport, I found myself in a campground in Morocco sharing a fantasy: Driving the entire length Africa, experiencing wildlife in their own environment and visiting existing veterinary colleges on that continent.. There were many obstacles to overcome, some of which included putting up a bond on the vehicle in order to cross borders, visas for each country to be visited and getting past the pessimistic and fear laden tales of other travelers who claimed it could not be done.

I had taken care of the administrative details in the European capitals I had visited, but the discouraging stories passed on by travelers who had never really experienced an atte

mpt at this journey was the most difficult to overcome. As I was to learn later, the information they passed on was wrong. According to some self proclaimed experts, we would encounter no lions in West Africa.

As luck would have it, I met an individual who had been planning this sojourn for years in a campground in the North African country of Morocco. He had refurbished a land rover and had replacement parts for most contingencies and every Michelin Map of Africa available. We enlisted a third party to join our caravan and we set out to prove the naysayers wrong, that driving the length of Africa in a Volkswagen camper was possible and could be the journey of a lifetime. 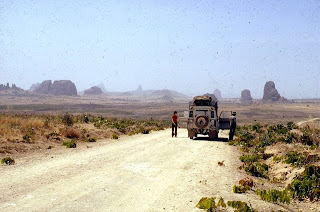 The journey through the Sahara desert was indescribable. To be surrounded by the boundless beauty of an untamed wilderness removes one from the consciousness of the potential threat it provides and for the sake of brevity I will leave many of those details behind. However, I can share that the travel is grueling because there are no roads as we know them. There are paths defined by piles of rocks placed for guidance and grooves in this path placed by the supply trucks that travel between oasis to oasis.

The Sahara desert terminates in what is defined as sa

vanna. It is here that vegetation begins to grow and we encountered human life for the first time. Nomadic desert people would greet our small party and sit and observe us on the periphery of the locations we selected to spend a night. They were not threatening, but rather seemed to be welcoming and protecting. It was a memory of the universal potential of sharing space in harmony that I will forever cherish.

As we continued on our trek into the interiors of West Africa and towards the West Coast of the continent we found ourselves in a country called Haute Volta. Still sub-saharan, the roads were like old fashioned wash boards. Driving over them required keen observation because they could lead a driver off the edge of a dangerous precipice and they required you to drive at a speed that prevented the vehicle from dipping into every rut encountered. At the end of the day, exhaustion was routine.

It was at the end of one of those days that I experienced an event that will be forever etched into my memory. A memory that was comparable to seeing a child born, for it represented not a beginning, but rather the avoidance of a sudden and brutal end.

It was dusk when we found a clearing to park our vehicles in a fort like configuration of three. . It was an arduous task at the end of each day to first clean the air filter, refill the gas tank from the gerry cans we carried on the roof and finally, unpack the cooking gear.

If you will remember, we were advised by traveling “experts” that we need not fear lions in West Africa. The silence of the early evening was interrupted by the “put-put-put” of a scooter coming from a distance. When it finally arrived in our clearing, a short dark man in crisp khaki shorts and a pistol on his waist advised us that we were in a dangerous area of a game reserve and would have to move to a campsite some 5 miles down the road. Admittedly, exhausted and totally surprised, I didn’t really believe this “park ranger”, humored him, waited for him to leave and ignored his advice.

He returned about a half hour later, and with a hand on his pistol,

convinced us to move on and left again. By this time, it was dark and it took all the energy we could muster to reassemble our equipment. It was an absolutely gorgeous night, and without the benefit of moonlight, I drove to a location on the very edge of the clearing next to the wild brush surrounding us. As I waited for the other 2 vehicles to complete their preparations to move, I left the security of the VW Campmobile to stand under a starlight sky that was radiating the glow of a myriad of stars. I was within feet of the brush on the edge of the clearing and could not see into as a result of the darkness that engulfed me.

When I returned to the car, I got in and turned on the headlights. They quickly illuminated the place where I was just standing on the edge of the clearing and….the glow of 10 golden eyes reflected back the light of the headlights. I had been standing right next to a pride of 5 lions!

At that moment I viscerally screamed, “Lions,lions,lions” and felt an exhilaration that probably only comes with sharing a birth or narrowly escaping death. Since that moment, I have reviewed the circumstances of the experience repeatedly and have formed some opinions based on my experience with animals that are admittedly, totally subjective.

I have learned that I must disguise the experience of feeling fear when working with dogs and cats. If I do not, they have the ability to smell it and will often react fearfully themselves. This sense of insecurity can result in aggression that might be avoided. I assume that is an instinctive response on their part and I have learned that an animal will be easier to work with if handled gently and without fear on my part. This is a form of communication which animals share with each other.

When I stood next to the lions, they smelled no fear or submission. Probably confused and unable to interpret either stupidity or courage, they elected not to attack. It was a matter of choice, and a very lucky one for me!

Having survived this close encounter, nothing quite that threatening occurred during the rest of the trip through the jungles of the Congo and Central Africa, although there were many meaningful encounters. Finally, we reached the East African country of Uganda. It was here that I was offered a position teaching Small Animal Veterinary Medicine at Makerere University in Kampala, Uganda. At the time, it was East Africa’s top academic institution and I was honored by the offer. I must admit I was confused by the decision I had to make. The offer represented an unusual opportunity; however, I was not totally prepared to stop the journey and was torn between this offer and driving on to Johannesburg, South Africa or putting the vehicle on a car ferry from Mombassa, Kenya to Bombay, India and all the adventure and learning opportunities awaiting me there. It was a matter of choice.

I elected to continue my travel through Africa and left Uganda after a short rest. At the time, a dictator was in power in Uganda and I cannot say for sure if that influenced my decision to move on. It was in Tanzania several weeks later that I heard the terrible news; many of the faculty at Makerere University had been executed by Idi Amin. The lions in West Africa had elected to spare my life; a human being could have terminated it.

The philosopher, Niezsche once said, “That which does not kill you makes you stronger”. At the time, I would have concurred with this sentiment completely. After the birth of my children, I probably would take some exception to that, however, I did gain many things from this journey.

The most enduring lesson was that of achieving a goal. The satisfaction gained and the self confidence garnered is priceless. I also learned that fear can be a positive emotion when employed appropriately; however, it can also extinguish great potential if allowed to rule decisions without research and determination.

With the exception of a despotic dictator, I felt sheltered and protected by the people I encountered on this journey, and visualizing wildlife from ground level made me keenly aware of this precious resource and our responsibility to protect it.