The Influence of Pets in My Life

Some animals come into our lives as blessings.   These pets change us and teach us, and sometimes we understand the profound nature of the relationship only after they leave us.   For me, one such creature was a horse named Snowbird.  Snowbird was just one in a menagerie of  animals that have left me with a wealth of shared experiences and insights.

To understand the influence animals like Snowbird have had on me, many of you can reflect on your own experiences with special pets.  Over the years she was one of a myriad of pets that shared different passages and evolutions. In a previous article I described her influence on me.  Below are the other creatures that blessed my life as a child growing up in the suburbs, one who was my roommate during my college years and the several pets Jacqueline and I have shared. 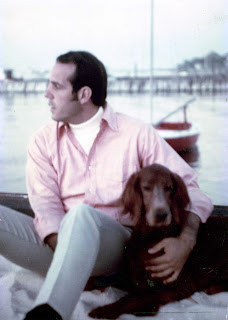 My experience with pets started as a child living in suburbia with parents who both worked.  An English springer spaniel named Bootsie was my companion in a frequently empty household and my bond to her served as an inspiration for what was to become my profession, veterinary medicine.

During my university years, an Irish setter named Nina was my constant companion.  After graduating from veterinary college, I joined the U.S. Air Force and was sent to Southern Italy as a military public health officer. At the time,  I had to leave Nina and my girl friend behind. When I returned two years later, my girl friend had moved on but Nina was waiting.  A lesson in unconditional love; at least I was batting 500.

Nina stayed in my life for many years.  We drove across the country and had a scrapbook of experiences to share ala John Steinbeck in his wonderful book “Travels with Charlie”.

Nina remained with me while I ran a small animal practice in New York City. At the time, NYC was becoming less inhabitable and I ventured on a quest which turned out to be the journey of a lifetime. I left all my material   possessions behind, and researched and implemented a driving expedition accross Africa, living alongside desert nomads, camping alongside ancient species of animals and living with native tribal people who embraced me as part of the universal community of man.  Having to cross many borders, some with potentially life threatening  pitfalls for a pet, I had to leave Nina behind. 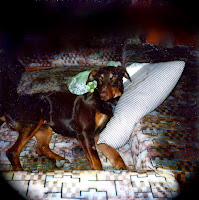 When I met my wife, Jacqueline, I inherited a new round of what we might call “step pets”. There was Buzz Bomb, a Doberman Pincher puppy  with every inherited disease known to veterinary medicine.  Also included in Jacqueline’s menagerie was Otis, a finger biting skunk and Katie, a delightfully neurotic parrot.

Buzz Bomb taught me to respect each animal as an individual and not to accept stereotypes given to certain breeds.  He became our first “child”, and frankly we were silly in love with him.  Some see Dobermans as threatening, while in fact, Buzz Bomb was the gentlest creature imaginable.   We would be entertained by what we called the “Buzz Bomb-Otis show”.  Can you visualize the hysteria that ensues when a skunk named Otis chases a Doberman Pincher around the house?.