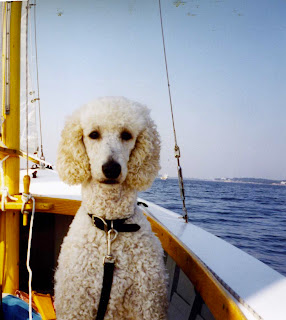 One of my responsibilities as a veterinarian is assisting my clients in the process of saying goodbye to a beloved friend. Grief counseling has become an established aspect of my profession and my own personal experiences have guided me in my attempts to make this time as peaceful and kind as possible. A broken heart takes a long time to heal, and I hope my own personal experience will in some way enlighten those who suffer a loss.

My story began while I was doing a housecall for a local breeder of poodles.At the time we had two dogs and a cat and I was very satisfied with our family of pets. I really didn’t NEED another dog. In a litter of black eight week old puppies, there was one white male. While the others huddled together and slept, he was busy “at work”,running in and out of the house carrying a majority of the house hold puppy toys. He was sassy…he had attitude, and against my better judgment I looked into his eyes and I lost my perspective. He came home with me.

That was over thirteen years ago. In the interim, we established that special bond that many of you share with your pets. His name was Colin. We were best buddies, and even though I am blessed with the best son anyone could dream of, he was jokingly referred to as my “number one son”. He became the clinic mascot and his image graced our website.

He had the conformation of a champion and a grace in motion that could make your heart soar when you watched him canter on a beach. One of my fondest memories was the visualization of the pattern of his paw prints on a deserted beach at low tide. He was athletic; one of his characteristic moves was jumping shoulder high when excited about your entrance or mutual exit. However, his real virtue had nothing to do with his breeding, the way he was clipped, or his athletics...it had everything to do with his heart and soul.

We were buddies. When he was mischievous, I was his coconspirator. When he carefully plotted the theft of food from a counter, my wife Jacqueline’s annoyance was countered by my mirth. I marveled at his intelligence and can only apologize to Jacqueline for my insensitivity. He had a vocabulary. I could swear he understood our language. If anyone in the family was at odds with one another, he simply got bummed out. He was a reflection of our emotions and more often than not communicated that. His tail would sink between his legs and you knew all was not right in his world because all was not right in ours. He told you it was time to shape up and get happy. 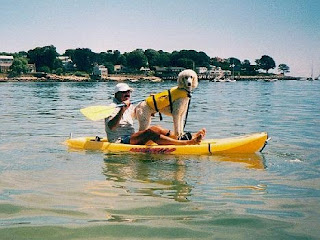 And then there was his intuitive side. He had distinct likes and dislikes. He never learned how to swim and detested the water.However, he really enjoyed sailing with me in our little fourteen foot sailboat. The way I got to the mooring was paddling on an eight foot yak board. So we worked it out…if I positioned him on the yak board on the beach, and pulled it into the water, then mounted it with him between my legs, he would balance himself perfectly while I paddled and until I pulled alongside the sailboat where he could jump off. We never took a tumble.

We teach our pets many things, however, one of their gifts to us, if we are willing to examine it, is what we can learn from them. “Colin” was no exception to this rule. Unconditionally loving, forever forgiving and totally loyal…what a string of virtues. However, I have always believed the greatest characteristic he exhibited is the thing we all work so hard to achieve, living in the “present”. For Colin there was no past and no future. (Other than plotting to steal food). In many ways he lived in a state of meditation.

As a human, there is a payback for all that we are given. It is the responsibility to care for them, sometimes at the expense of our own emotions. Last Saturday night, at 4 am in the morning, I did one of the most difficult things in my life. I lovingly ended his time on earth. Jacqueline and I had prepared ourselves for this eventuality. We had always had multiple pets; however, he was the end of the line. We even joked about how we would be pet “empty nesters” for the first time in our many years together.

That was before we actually had to experience the reality of his loss.

Returning home, I could not believe how empty the house felt, how empty my heart was and what profound grief I felt. His toy “babies” sat in the alignment he would carefully plan and they where another reminder of his special nature. It all felt so surreal….Colin was gone.

My next lesson came a day later. While Christmas shopping, Jacqueline suggested we stop by a pet shop “just to look at the puppies”… Now here comes my mea culpa, my “do as I say and not as I do!”… In our practice, we recommend adoption from animal shelters and animal rescue leagues for pure bred dogs.

As we entered the pet shop our attention was immediately draw to a puppy with Colin’s moves. Tossing around a toy and looking at us through the cage bars she had been inhabiting for 6 weeks. In the visiting room, it was over in minutes. We had to rescue her. I have always considered getting another pet soon after the loss of one a very personal decision; however, our own experience may cause me to modify that.

We still cry when we think about Colin. However, our pain is tempered by this new beginning. She greets us with unbridled enthusiasm, runs around the house with his toys and brings laughter and joy back into our household. Perhaps it is apt that we share the beginning of a life after the loss of one. Our puppy has been named “Little-Foot”, because she is smaller than Colin, and partially to recognize she has such large shoes to fill.